The beautiful city of Bamberg is mainly known for excellent food and beer. Yet, one can also find great cocktails here these days. With a population of only 70,000 Bamberg has developed a vital and interesting bar scene, which is not only catering to the locals, but has raised a lot of attention on a national and even international level. We’ve been behind bars at Ostbar already, and this time around we sat down at “Das Schwarze Schaf”. What looks like a typical place for students, turns out to be a perfect source of even more perfect drinks. How come? We had a chat with bar chef Sven Goller to find out.

2. Why improvised?
Well, you can see how improvised our bar counter has been built (it is actually a reconstructed IKEA desk, editorial notice). We try to make possible as much as we can in a very small space.

3. That’s quite fitting – Bamberg, too, is rather small. Yet, the city has many nice bars here. How come?
When we started out in 2012, there was nothing. Some other people followed our lead, so to speak, and once people get used to being served good drinks and you offer them something different to what they are used to, you can get very far actually. The city in general is very open-minded when it comes to food and drinks. We’ve got breweries, bakeries, garden centers … the food is quite cheap, the quality is very solid though.

4. So you have to be very careful with how you price your drinks?
That’s true. People enjoy trying out new things – we have a lot of tequila cocktails on the new menu and they all work well. However, we have to keep the price of most drinks between 8 and 9 euros.

5. So, what should we try when at „Das Schwarze Schaf“?
Our signature cocktail is called “Smoke Upon the Hills”. It looks like a beer and is kind of “Bamberg in a glass”, actually: Smoky whisky, Urbock by Schlenkerla and Rauchbier by Spezial (two of Bamberg’s many breweries, editor’s note), apple juice from orchards, Bamberger Siebenhügeltropfen, a herbal liqueur, aquafaba foam. And local licorice: the city was well known for it throughout Europe until the 18th century. It is now being grown here again.

6. And which drink with Thomas Henry do you recommend?
I’d like to recommend two: the “Wake Up Call” with rum from Guatemala, Fernet Branca, vanilla syrup and Thomas Henry Coffee Tonic. And the non-alcoholic “Dry & Wonder” with aromatic tea blend, hibiscus, blackberry and Thomas Henry Slim Tonic. 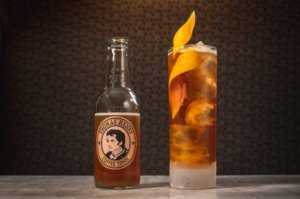 7. You are also traveling a lot, participating in many cocktail competitions. You actually get so see a lot of different bars – what makes a good one for you?
It’s not all about the looks. In here, it’s very bright, colorful and squeaky, but I also like dark bars. The “Bar Zentral” in Berlin with its long counter is a bar I like to go to, for example.

8. You also still do trainings and events with the “Institute for Cocktail Technique”.
Yes, even though time has become scarce. The tastings usually take place from October to April: craft beer and whiskey, gin, mezcal and tequila … about once a month.

9. Final question: What does Sven Goller drink when he’s done with work?
A beer from Bamberg!