Right in the middle of Stuttgart’s city centre, Bastian Sommer’s recently opened bar, club and café ”Cape Collins“ is a new hot spot for lovers of anything to do with space.

Are you ready for a little quiz? Who was the first man on the moon? Simple enough, we get it, let’s rephrase that. Who was the second man on the moon? Buzz Aldrin, well done. But do you know the name of the astronaut who stayed on board of the Apollo 11 circling the moon, while Armstrong and Aldrin had fun jumping around on the moon’s surface? His name is Michael Collins. He never actually made it onto the moon. He is, however, the first man in history ever to take a space walk. Not bad, either.

A Tom Collins for Michael Collins
Bastian Sommer could not agree more. After all, he adequately named his new bar both after the astronaut and the Air Force Station Cape Canaveral: Cape Collins. During the day, he and his team serve freshly cooked lunch (i.e. Dim Sum on Tuesdays, Ceviche on Thursdays), on-site roasted coffee, craft beer and cold-pressed juices. Later on, in the evenings, it is all about experimentation. For the ”Space Class Cocktails“, the staff uses ingredients, any astronaut up in space would die for while sucking on food specially packaged in tubes like toothpaste, looking down on our blue planet. At Cape Collins, it is all about home-made syrups, herbal essences and meticulously preserved delicacies. This is not just for show, it really is an ongoing experiment. Once Sommer and his team have all the details down, the best creations will be showcased during special events and tastings. Right now, guests can already pick one of many varieties of the classic ”Tom Collins“ cocktail, for example. Thomas Henry obviously plays a major role in many of the long drinks, be it a „Paloma“ with Ultimate Grapefruit (new product since 2020: Thomas Henry Pink Grapefruit), tequila and fresh lime juice or a „Dark‘n‘Stormy“ or a „London Buck“ with our Spicy Ginger.

Sommer enjoys anything to do with flying. Before he opened ”Cape Collins”, he’d made quite a name for himself in Stuttgart already, managing ”Bravo Charlie”, located in the former city terminal of Lufthansa. ”I always need a specific topic”, the gastronomer, who was also involved with ”Suite 212”, explains. Here, at ”Cape Collins”, the theme to pick was rather obvious. The L-shaped interior looks and feels futuristic, resembles a launch pad. The DJ booth in particular looks like a space ship. The big monitor and the molecular lamps with its irregular design are your mirror into space. Meanwhile, the mosaic-shaped patterns of rubber foam not only look like they’ve been lifted from a science fiction movie set, but also guarantee the soundproofing of ”Cape Collins”. ”Our club is completely vibration-free, it is basically a recording studio”, Sommers explains. Much needed precautions. Otherwise, it would have been impossible to obtain a music-related license from city council to open a club in this very prominent location right around the corner from bustling Calwer Platz. DJ sets are a defining part of ”Cape Collins”. On Thursday, Fridays and Saturdays, DJs are playing mainly funk, soul and rare grooves: vinyl only. ”Cape Collins” may look like a place from outer space. When it comes to music, however, Sommer is ”old school through and through”, he says.

A perfect fit. If extraterrestrials were ever to find the space probe ”Voyager” in space, they’ll sooner or later figure out a way how to listen to the selection of music man-made music on board: pressed onto a record made from pure gold. 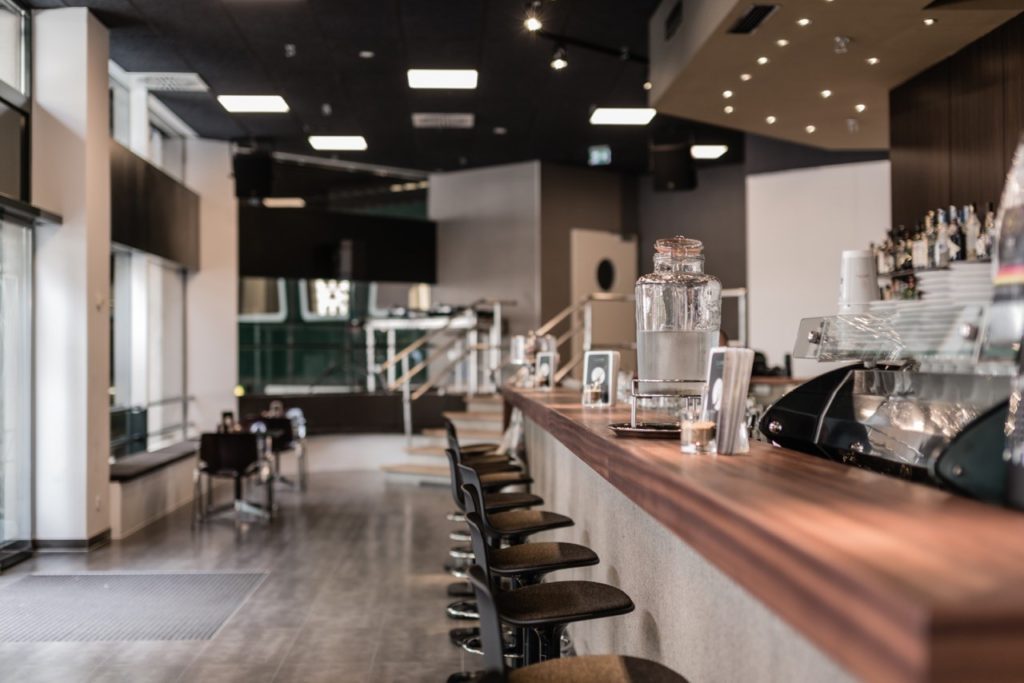