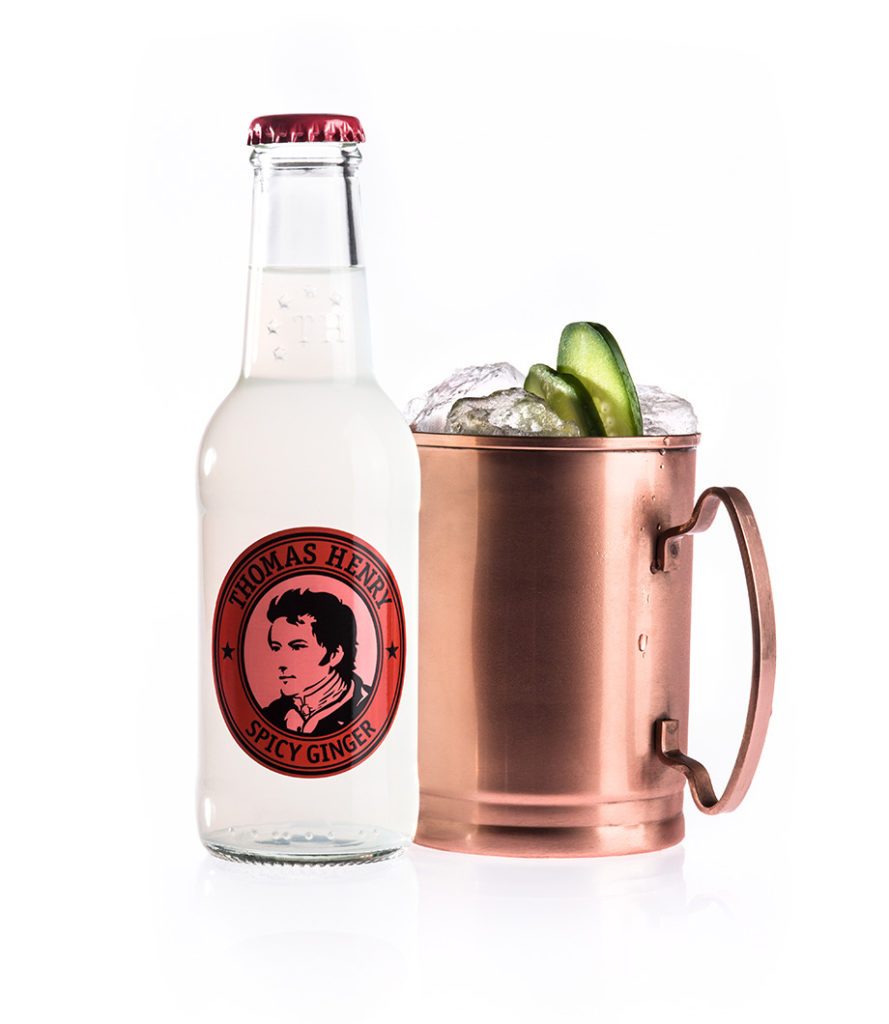 Fill half the copper mug with ice cubes. Add vodka and squeeze the juice of half a lime over the ice. Fill with Thomas Henry Ginger Beer and garnish. Cheers!

The Moscow Mule has been experiencing a new round of popularity for several years now. But the story could have ended very differently — both in the USA, where the cocktail was invented, and in Europe. The signature drink contains the premium filler Ginger Beer, refreshing lime juice, and vodka. Thanks to the chilli notes in Ginger Beer, the ginger aromas are released and are free to unfold their complete powerful taste.

The combination of fruity, spicy citrus notes, and a pleasant sweetness makes the difference here. Because: Ginger Beer is not a Ginger Ale, but a refreshment produced in the tradition of Ginger Beer — meaning it is based on fermented ginger. The result is an alcohol-free filler that not only serves as the basis for the Moscow Mule, but also for other classics such as the Dark’n’Stormy, which is made with rum.

Why do I serve the Moscow Mule in a copper mug?

For centuries copper has been known for its positive temperature properties. Both cold and heat keep particularly well in a mug made from copper. For the Moscow Mule, this means that it stays exactly as cold as it has to be, for as long as you need it to. The inventors of the drink quickly became aware of this. In 1941, barkeeper Wes Price experimented with ingredients he had bought too much for at the Cock ’N’ Bull bar: Smirnoff vodka and Ginger beer. The mixture paired well and became a standard at the bar. The copper cups did not hurt.

Guests were thrilled to drink their cocktail from a different vessel than from a glass. In the Cold War, however, the drink was discredited in the USA. “Patriots don’t drink a cocktail with Moscow in its name”. Fortunately, this phase did not last too long and the Moscow Mule became socially acceptable again. In Europe, on the other hand, it was difficult, if not impossible, to get a good ginger beer for a long time. Since the introduction of Thomas Henry Ginger Beer the drink has become more and more popular. The drink’s career has been a unique one: from insider tip to classic.